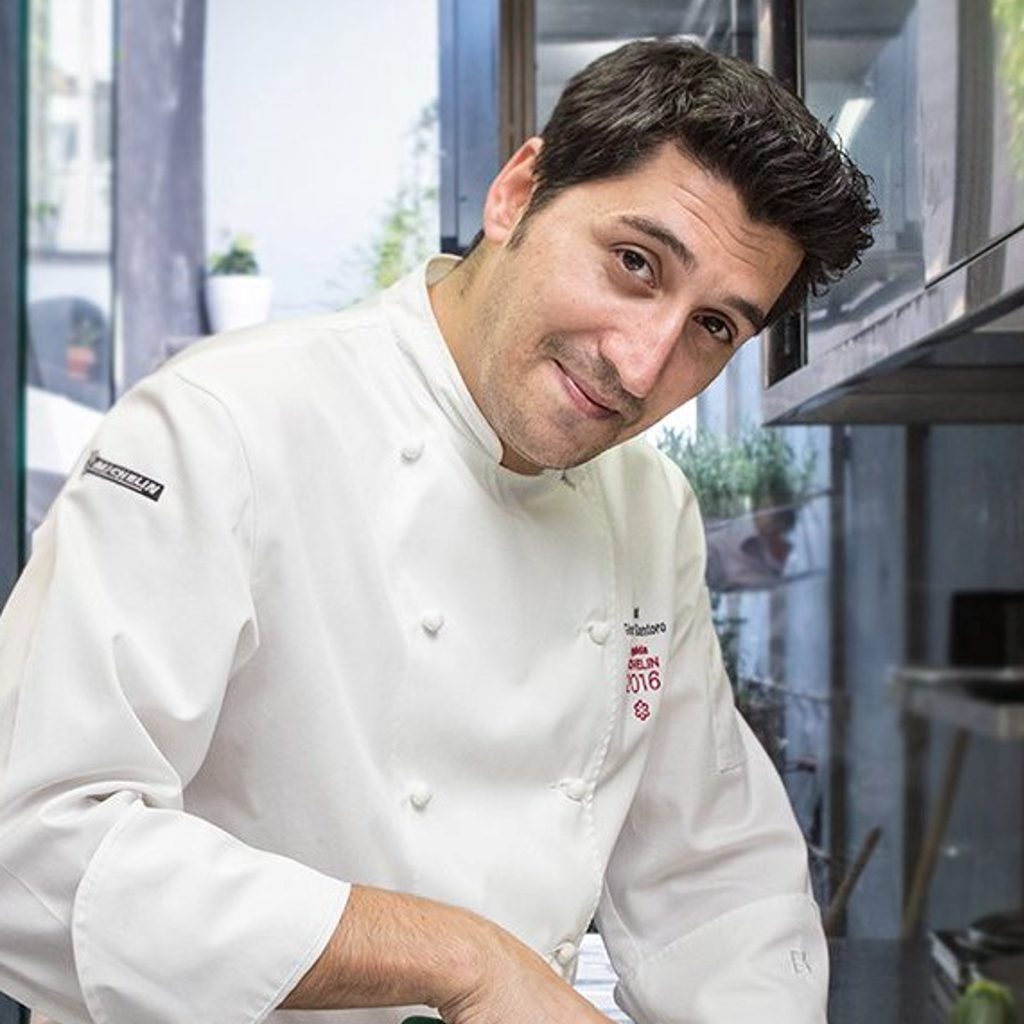 Chef Giovanni Santoro will be cooking live at the BBC Good Food Show Summer 2022 in the Italian Kitchen on Thursday 16 & Friday 17 June.

Giovanni Santoro is the chef of the Michelin-starred Shalai restaurant in Linguaglossa, on the slopes of Mount Etna, in the province of Catania. He expresses himself through neatly defined dishes, careful selection of raw materials, a bond with his land and the possibility of elevating himself to have an all-round vision of what Sicily can offer. ‘A Muntagna’, the so-called volcano, that contains the sense of taste and makes the heart beat faster, triggering that harmony between flavours and territory, makes the chef touch unique, refined by previous experiences gained in many Italian regions and even before in restaurants located along the coasts of Sicily.

On one side Etna, on the other one the sea, two apparently distant perspectives that give uniqueness to the territory and consequently to those who live and interpret it.

In Santoro’s cuisine, the two elements that draw the skyline of his Linguaglossa, where he was born in 1983, lead him to propose a cuisine full of synthesis, identity and that never neglects the naturalness of those memories cloaked in the warmth of family Sundays and his grandmother’s sauces.

It is a cuisine that in December 2015 won the Michelin Star and in the following years (until today) has been reconfirmed, in addition to other important awards.

Identity is what each dish expresses, preserving an aura of mystery that always leaves you amazed at the second bite.

Santoro constructs each dish in an essential but intense way to leave in his guest that feeling of well-being that is the essential prerogative of Shalai, restaurant and hotel, owned by the Pennisi family.

The proposed cuisine is the story of a Sicilian feast, lived among the loved ones, where hospitality and generosity are the main pillars.

Each ingredient has a personal interpretation and each combination is the result of studies and tests until reaching the final proposal, never over the top, but silent that goes straight to the heart and palate, as only Giovanni Santoro can do.

Shalai was the natural habitat for the chef that allowed him such insights and studies with the clear intention of offering to the guests the unexpected that places on the slopes of Etna can offer.

Generosity and harmony, enchantment and refinement, taste and elegance are the guidelines on which Shalai’s cuisine is built, under the signature of Giovanni Santoro, projected towards that infinity that always changes on the horizon with the passing of the seasons, which represent the other essential element of his cuisine made with the heart and continuous research.