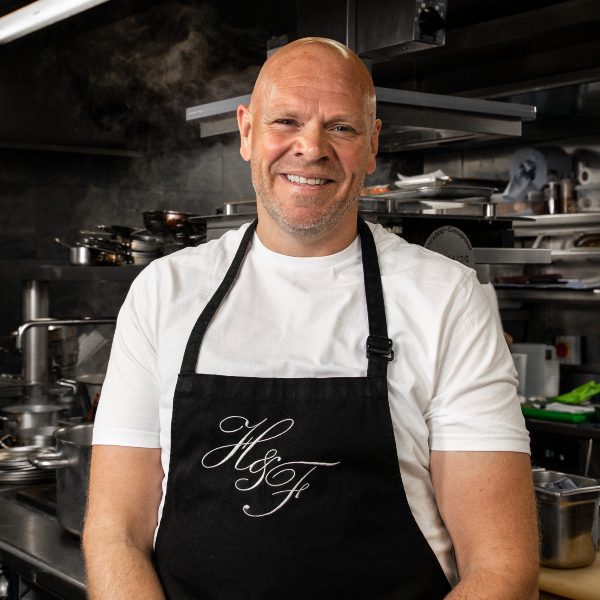 Tom Kerridge will be cooking live in the Big Kitchen on Thursday 16 June at the BBC Good Food Show Summer 2022. You can also see him around the Show in a live interview on the Let’s Talk Good Food Stage and at the Book Signing.

Tom is a great character with amazing presence, obvious warmth and an infectious laugh, so it wasn’t a surprise when he landed his first TV show. The popular BBC2 series Proper Pub Food became an overnight success with Tom’s fan base growing weekly as the six-part series was broadcast. Since then Tom has appeared on and presented numerous series (listed below). Tom’s latest BBC 2 series ‘Saving Britain’s Pubs’ sees Tom set out on a mission to revive struggling pubs, investigating industry challenges along with the immensely negative impact of Covid-19.

Tom is also a successful author having published nine highly acclaimed cookbooks, many of which have tied in TV programmes. Tom’s long-awaited The Hand & Flowers Cookbook was published by Bloomsbury Absolute in November 2020. This book celebrates 15 years of Tom’s two Michelin starred pub The Hand & Flowers and is full of the very best dishes to have appeared on the menu, including his Great British Menu winning dishes!

In 2017, Tom launched Pub in the Park Festival in Marlow, a music and food festival celebrating local quality pub food. In 2019 the festival rolled out to eight locations all over the country.

Tom has also created a range of cookware, homeware and a range of sauces including a black garlic ketchup. The kitchenware range which includes knives, enamelware and pans are all chef quality, beautiful products that have been designed by Tom in collaboration with British manufacturers using British materials.

Most recently Tom has taken his passion for fantastic food to new heights as he partnered with British Airways to design a delicious new range of food to be enjoyed on board. This range includes signature sandwiches and a pie which have been created using Tom’s seasonal approach to cooking and his use of great British ingredients.

Tom donates a lot of his time to many charitable causes, including his personal project ‘Meals for Marlow’ where Tom and his team delivered meals to the NHS and vulnerable individuals during the 2020 pandemic. The team prepared over 80,000 meals. Most recently, Tom has joined forces with Marcus Rashford on his campaign to stop child poverty and to encourage a sustainable long-term system for free school meals for the most disadvantaged.

· Great British Menu – BBC2 (competed and won the main course twice, which has never been done!)

· Dopamine Diet (2017) – this book soared to No.1 across all hardback non-fiction books.