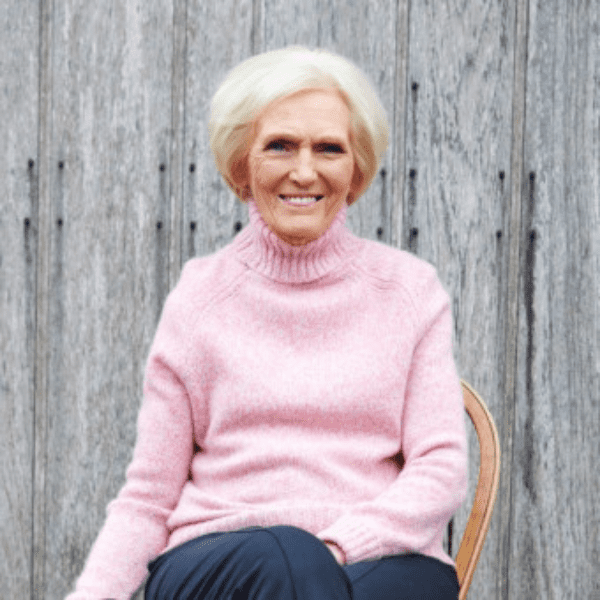 Dame Mary Berry will be cooking live in the Big Kitchen on Saturday 18 June. You can also see her around the Show and at the Book Signing.

Queen of Baking, Mary Berry is a BBC Good Food Show favourite – see her cooking live in the Big Kitchen and in interviews around the Shows.

Dame Mary Berry is one of the country’s best loved cookery writers and television personalities. She was awarded a Damehood in the 2020 Birthday Honours List for services to broadcasting, the culinary arts and charity work.

Mary is known worldwide for her work as a judge on Best Home Cook, The Great British Bake Off, Junior Bake Off, and Comic Relief Bake Off.  She also presented the Love Production’s American spin-off show The Great American Baking Show for NBC.

Most recently, Mary was on our screens in December with her Christmas programme Mary Berry’s Festive Feasts (BBC1), in which Mary taught some of her wonderful festive recipes to three novice cooks. Last year Mary also presented her most recent cooking series, Love to Cook, which aired on BBC2 in November, and she returned as a judge for the first celebrity series of Best Home Cook (BBC 1).

In 2019, the fantastically festive A Berry Royal Christmas was broadcast on BBC1, where Mary met the Duke and Duchess of Cambridge and helped them prepare a festive feast to thank all those working and volunteering over the Christmas period.

Mary trained at The Cordon Bleu in Paris and Bath School of Home Economics, and in the swinging ’60s Mary became the cookery editor of Housewife magazine, and later, Ideal Home magazine. She first appeared on television in the 1970’s when she became the resident cook on Afternoon Plus with Judith Chalmers.

Combining motherhood and work, she continued writing books and filming television series for BBC from her home. She launched the extremely successful Aga Workshops, a cookery school which had over twelve thousand students over sixteen years. She has written over eighty cookery books with sales of over six million copies.

Mary is a Patron of the Child Bereavement Trust, an Ambassador for the RHS and President of the National Garden Scheme. She has won many awards including Good Housekeeping Award for Food Book of the Year and an NRTA for Best Television Chef. In 2012 Mary was honoured with a CBE for services to culinary arts and in 2017 she won the title of Best TV Judge at the National Television Awards.

Mary was delighted to have been made a dame for services to broadcasting, the culinary arts and charity in the Queen’s 2020 Birthday Honours List.

Mary lives in Oxfordshire with her husband, has two grown up children and five grandchildren as well as her working cocker spaniel dogs Darcey and Freddie. She continues to work alongside her assistant of 30 years Lucy Young, who has also co-authored some of Mary’s later books.