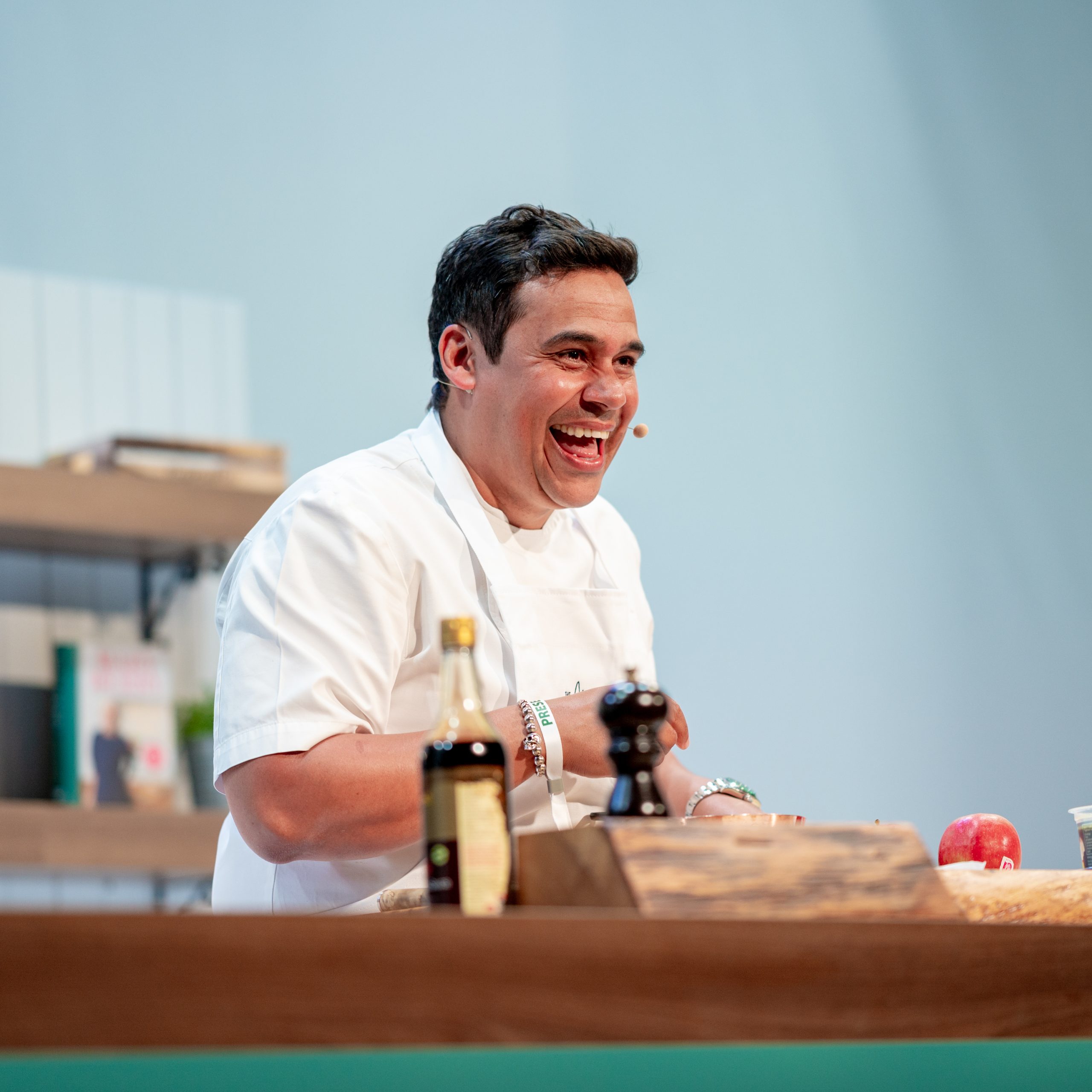 You can catch Paul cooking live in the Big Kitchen on Thursday 15th June at the BBC Good Food Show Summer 2023!

Growing up in his parents’ guesthouse in Southampton, Paul Ainsworth was part of the hospitality industry from the very beginning. Watching and helping his parents at work, he developed a strong sense of hard work and determination to succeed. A passionate supporter of Cornish farmers, fishermen and artisanal producers, Paul’s passion for imaginative and flavour-packed cooking celebrates everything the region has to offer.

On leaving school, he studied catering and hospitality at Southampton City College, working locally at The Star Hotel, and at Careys Manor in the New Forest where he enhanced his passion for learning. In 1998, Paul achieved his first big break when his college tutor helped him to secure a job at Gary Rhodes’ Michelin-starred Rhodes in the Square in London.

After two fulfilling years, Paul moved on to work with leading British Chef Gordon Ramsay at his three Michelin-starred restaurant on Royal Hospital Road. While working at Restaurant Gordon Ramsay, Paul was part of the team that successfully achieved three stars for the revered establishment. An opportunity to work for fellow Gordon Ramsay Chef Marcus Wareing at Pétrus in St James’ arose in 2003, and Paul relocated to The Berkeley with him later that year.

After six years with Gordon Ramsay Holdings, Paul was invited to head up the kitchen of No6 in Padstow. Four years later, in 2009, Paul and his wife Emma took over the restaurant from their business partner Derek Mapp and relaunched it as Paul Ainsworth at No6, winning a
Michelin star in 2013, one of his proudest moments to date. Above the restaurant is a relaxed
bar, CiCi’s, open to all (not exclusively No6 diners) and named after Paul and Emma’s daughter.

In 2011, Paul and Emma acquired Rojano’s (which was originally opened in 1974 by local businessman Stanley Rojano), and, with a nod to mentor Gary Rhodes, relaunched it as Rojano’s in the Square.


In 2015, the couple launched their most ambitious project to date, Padstow Townhouse. The 18th-century building has been lovingly restored by Emma and interior designer Eve Cullen-Cornes, helping to cement Paul and Emma’s positions as celebrated restaurateurs and hoteliers. The boutique hotel offers six uniquely designed suites with luxury bathrooms, a kitchen pantry and honesty bar, and in-room spa treatments.

In May 2019, Paul and Emma reopened Rock institution The Mariners Public House following a dramatic refurbishment. It was awarded ‘Best Newcomer’ at the 2020 Estrella Damm Top 50 Gastropubs Awards, as well as entering the Top 50 list at number 23, then climbing to 5th
position in 2021. The Mariners also won ‘Best Pub’ at the 2020 GQ Food and Drink Awards. 2019 also saw the launch of Mahé Chef’s Table and Development Kitchen, the couple’s fourth Padstow venture, named after an island in the Seychelles where Paul’s parents first met.

In 2020 Paul and Emma purchased the freehold to Rojano’s in the Square and carried out a full rebrand, renaming it Caffè Rojano by Paul Ainsworth and implementing a Mediterranean-inspired menu. They introduced a Mediterranean-style menu and bold new look, inspired by a visit to Caffe Donte during a family trip to New York.

In July 2019, Paul celebrated two prestigious wins at The Cateys for ‘Restaurateur of the Year – Independent’ and the ‘Chef Award’. In addition, Paul Ainsworth at No6 placed number 16 in the Top 100 Estrella Damm National Restaurant Awards. An employer of over 150 team members across his venues, Paul is committed to helping others to thrive within the industry. In 2018 Paul launched the Paul Ainsworth Academy in partnership with Truro & Penwith College, offering hospitality students paid experience across all five of the businesses.

Paul and Emma are ambassadors for the Cornwall Air Ambulance and work with a number of other charities including Hospitality Action and Springboard. In 2019 Paul ran the Virgin Money London Marathon, raising over £47,000 for Pancreatic Cancer UK in memory of his late father.

A charismatic and engaging chef, Paul’s personality and cooking attracts publicity. He appeared on BBC2’s Great British Menu in 2011 and won the South West regional heat, which resulted in him serving his dessert at the final banquet at Leadenhall Market, London. He has since been on Saturday Kitchen, Sunday Brunch, MasterChef, ITV’s This Morning, The One Show and James Martin’s Saturday Morning. In 2017 Paul co-presented the royal-themed cooking programme, Royal Recipes, as well as BBC1’s The Best Christmas Food Ever the following year.

August 2021 saw the launch of Paul Ainsworth’s Travelling Feast, a food, drink and music festival that toured Cornwall. Some of Britain’s best loved chefs and artists joined parts of the journey including Tom Kerridge and James Martin along with Kaiser Chiefs, Sister Sledge, Faithless and Rudimental.

Most recently, Paul has launched a podcast called Knives, Forks and Tunes, where he brings together the three key ingredients for the ultimate dinner party: the menu, the music and the conversation, and interviews famous guests such as Jamie Cullen and Janette Manrara.

Paul is a brand ambassador for BMW.